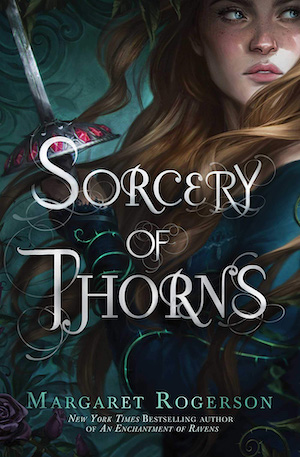 First off, I want this to be known: This book broke me. It broke me in lots of wonderful, poignant, emotional, gut-wrenching, shattering ways. After the very last line, I was consumed by All. The. Feels. It was that good.

Sorcery of Thorns is a fast, magical read which keeps the action moving throughout. Rogerson has a beautiful writing style, lyrical and flowing, and the world of Austermeer is well constructed and beautifully presented. I loved the idea of the Great Libraries scattered throughout the kingdom. Great Libraries, designed to hold books who have thoughts, feelings, and personalities of their own. These are sentient grimoires, books of magic both dark and light, and range in both power and threat.

The protagonist, Elisabeth, is an orphan who has grown up in the Great Library of Summershall. Her one desire is to become a warden of the Great Libraries — librarian-warriors, sworn to protect the books at all cost: a “duty unto death”. The downside is that trouble naturally seems to find Elisabeth, usually alongside her fellow apprentice librarian and friend, Katrien.

One night, Elisabeth is the only member of the Great Library who is unaffected by a sleep-spell designed to hide a heinous crime. In her efforts to thwart this act, she unwittingly becomes ensnared in a web of deceit, lies, political machinations, and terrifying magic. Whisked under guard from Summershall to Brassbridge, Elisabeth doesn’t know who — or what — to trust, especially when faced with demons and magisters (sorcerers) who challenge all her views and beliefs about the world. As she uncovers more of the mystery around the crime at Summershall, Elisabeth must grow out of her views and dreams and discover more about who she is — and who she could be.

I found Elisabeth to be a well-rounded character who had flaws of her own, and her willingness to reconsider her abilities and assumptions about the world was refreshing. She was all at once strong but scared, determined yet uneasy, knowledgeable yet naïve. I particularly liked the way she changed her viewpoint based on her experiences and what would be best for the kingdom, because it showed a rare maturity and presence of mind. And her reactions to being thrown into “high society” were valid and real.

In terms of the other characters, I loved Nathaniel. He is easily my favourite character — droll, dry-witted, quick with comebacks and ideas, and quirky. He was so well drawn and I appreciated that. His ever-present nonchalance is shaken by Elisabeth’s troublemaking and bright personality, and his assumption of his place in society — so sure for most of his life — is tossed on its head through the actions of Elisabeth and the Chancellor. Nathaniel’s comfort and (almost) glee in keeping society guessing about his sexuality was brilliant.

Speaking of the Chancellor, I loved how creepy and suave he was. Again, someone very sure of his station and very set in his worldview and plans. And again, someone disrupted by the sheer tenacity of the protagonist. The Chancellor, his magic, and his minions brought about lots of conflict and had my brain whirring for a while. Though I did predict a few things about the plot as the book progressed, these were revealed in ways that I did not expect and this kept it fresh and alive.

Silas — what can I say about Silas? He was a ghostly presence throughout and yet was one of the most substantial characters. He had a way of getting under people’s skin — both in terms of the other characters and the reader themselves. I loved how he was portrayed and his formalities, yet the affection between Silas and Nathaniel (and, later, Elisabeth) was so real and touching that it had me in honest tears at various points.

I liked and appreciated how the other women in the book were portrayed. Even Mercy, who initially I thought would be a rather throwaway character, had her place in the end. It was a delight to return to Katrien throughout the novel. My only complaint in terms of characters was that Stefan was never seen or fleshed out, and we didn’t see enough of Parsifal.

I loved the big reveal towards the end and it again brought tears to my eyes. I was thoroughly invested in the outcome and how it all played out — the discovery of who Elisabeth is and what she could do was powerful and the final battle was heartbreaking. The aftermath was bittersweet and delicately handled.

The romance was also poignant and had its issues to overcome — a slow burn to begin with, and then challenged by expectations and assumptions on all sides. Ultimately satisfying and very realistic.

There are few books which reduce me to tears with their last lines. Assassin’s Fate by Robin Hobb is one of them. This, Sorcery of Thorns, is another. It completely undid me and I was so grateful to have spent some time in Austermeer — a place to which I will return gladly again and again. Highly, highly recommended.

I received an e-ARC from the publisher, Simon and Schuster, through NetGalley in exchange for an honest review.