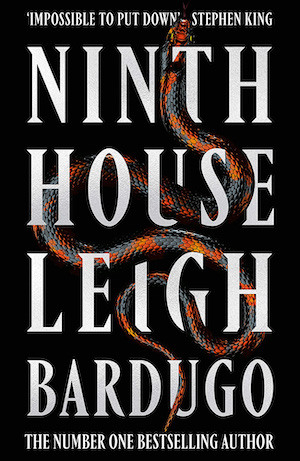 Leigh Bardugo’s debut adult novel, Ninth House, is beyond anything I expected. It’s a magical and intellectual tour de force; a powerhouse of plot and prose, suspense and suspicion, murder, magic, and madness. I came to it thinking it was a standalone, but it’s actually the first in a series, and I’m so relieved at that because I am hungry for more. I believe the sequel is slated for 2021, and honestly that can’t get here soon enough.

2019 will, for me, be the year of amazing books. I’ve read some fantastic novels this year, and I thought I had my Book of the Year already picked out. Now, I’m not so sure. Ninth House is mind-blowing and I’m still wrapping my head around it.

I first came to Leigh Bardugo through her YA series, the GrishaVerse, in which she’s written multiple novels and short stories. Ninth House is her first adult novel, and her writing here is an immense cut above her YA fare, honestly. It’s bold and brutal and striking, yet lyrical and magical. She’s really stretching her writing chops with this book, and it shows: her imagination and ability to plot and characterise is amazing.

Ninth House follows Galaxy (Alex) Stern, a former drug user and high school dropout, in her freshman year at Yale. How did she get into Yale? Through the sponsorship of a mysterious society called Lethe — the titular Ninth Nouse — which is tasked with monitoring the magical workings of Yale’s secret societies and their members. Alex is recruited from her hospital bed, the sole survivor of a gruesome multiple murder scene, by Dean Sandow, who offers her a chance at a different life. Different, of course, can mean many things…

One night, a murder on campus gets Alex’s attention. The victim isn’t a student from Yale, but her horrific demise isn’t something Alex can ignore. Her instincts say there’s more to the case than what the cops claim — an abusive boyfriend gone too far — but finding the evidence isn’t as smooth or easy as it initially appears. Woven into this storyline is the mysterious disappearance of Alex’s Lethe House mentor, Darlington, some months before; a disappearance that has sent shockwaves through the House and its surviving members, including Alex who is very much left thinking on her feet when it comes to dealing with the various societies’ extra-curricular activities.

The societies are powered by tombs, which are nexus of occult power built up over the years of students dealing in magic and the occult. These are the high-powered and elite, both past and future: Wall Street bankers, Hollywood stars, politicians, and other members of high society are students or alumni, and many of these still fund their societies, both financially and otherwise. The occult magic that is wielded by these societies can do more than change GPAs or ensure exam success; some are prognostications which provide glimpses of the future, some change a person’s appearance, whilst others guarantee social standings and wealth. This is the place power is born, cultivated, and unleashed upon the world.

Such magics are dangerous though, and can have drastic consequences, including blackouts and unexplained deaths. They all come at a cost — something which Alex is just discovering.

Alex, of course, has her own history — what brought her to drugs in the first place, her family life, her friendships, and why she alone survived a murder spree. Most of all, why would she, of anyone, be of value to Lethe? For Alex harbours both a secret and a dangerous gift — which will help to identify the victim, the conspiracies, and the magics underpinning what looks like a love crime gone bad.

Ninth House is complex and absorbing, and reading it is like drinking incredibly fine, incredibly potent, incredibly dark, alcohol. The story and prose are intoxicating. The setting is so vivid that I actually felt like I was attending Yale. There is a map in the hardback edition which was helpful at times, but on the whole I could sense the buildings and locations, observe the brickwork and streets.

Alex is an extremely complex character; deeply flawed yet noble, wiry yet strong. She goes through a lot in this book, physically and mentally, and in terms of character growth. The other characters — Darlington, Dawes, the Bridegroom, Mercy, Lauren, and others — are all well-drawn and really do get under your skin, for good and bad reasons (Blake, I’mma looking at you). They’re well-balanced, with positive and negative traits, and you can discern so much about their various personas by way of a throwaway line or comment, or one of Alex’s shrewd observations. I particularly liked Darlington and his wit.

It took me a moment to realise that, within each society, members have codenames to cover their identities. For instance, Alex is Dante. Darlington is Virgil, and so on. I liked how these were themed according to the leanings of each house — Wolf’s Head being a particular favourite — but it took me a while to put each codename to each character, where I had both available to me. Not all of them were disclosed, which I also appreciated — secrets are secrets, after all.

The pace never lets up in this novel, and it feels like a rush of blood to the head. There’s always something happening, or a sinister sense of something about to happen. The story alternates between the present events revolving around the murder and two past timelines — one of Alex’s former life, and one centred around Darlington and what happens (or doesn’t, depending on how you view it). This changing between timelines is handled beautifully and doesn’t ever feel disjointed or problematic; in fact, it’s so absorbing that, by the time the novel returns to the events of the prologue, it took me a moment to pick that back up, and that’s good.

If you have a background in witchery or the occult, there’s lots of symbolism throughout the novel — specific herbs, plants, rituals, which will cause you to sit up and take notice. If you don’t have such a background, that’s okay, because knowing about these elements won’t detract from the story at all. They’re just an added layer for anyone who does have such a background. Regardless, if you like fantasy, crime, the supernatural, and/or just love a damn good story, this is it. Ninth House is brilliant and will leave you thinking about it for days afterwards. It’s also perfect for Halloween…

I bought Ninth House and didn’t receive an advanced copy from the publisher. All thoughts and comments are my own and in no way reflect the opinion of the publisher or author. I received no reimbursement (financial or otherwise) for this review.