[Review] The Spirit Engineer by A. J. West 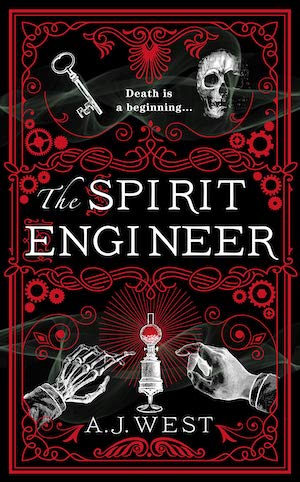 I was intrigued by the premise of The Spirit Engineer from the very beginning: set in 1914, Belfast is still reeling from the sinking of the Titanic, built in its shipyard. High society has become obsessed with Spiritualism, particularly séances and physical mediumship. The protagonist, William Jackson Crawford, is Professor of Engineering at the Municipal Technical institute, and a man of science. His wife, Elizabeth, is still grieving the death of her brother aboard the ill-fated Titanic, and there are problems both in their marriage and with their children. When additional tragedy strikes, William discovers that Elizabeth has been drawn into the world of Spiritualism, and sets out to prove or disprove the existence of the spirit world — hence the title of this novel.

As a character, William is unlikeable and challenging: embroiled in his own self-importance, he can be dismissive of those around him, unless he perceives them to be valuable in raising his position in society. We know from the beginning how it ends for William, which should garner some sympathy in the reader, but I struggled to resonate with him at first. The writing style is very much evocative of the time period, and it took me a little while to acclimatise to this, but once I had I appreciated the stylistic choices made. There is a constant, unsettling atmosphere of dread that pervades this novel and this presented in a wonderfully creepy way, hooking the reader into the gothic despair of pre-war Belfast. The disturbing activity in the Crawford home is also deftly handled, and is shrouded in mystery.

Despite starting slowly, the novel soon picked up pace and I was obsessed with the story and the motivations of the characters. Knowing a bit about Spiritualism and the history of séances and physical mediumship, I was rewarded with a story which has some solid research at its back. I was constantly reminded of the Britten Memorial Museum and Library (now the Britten Museum and Library) in Essex, UK, which I visited several times in my late teens and early twenties, where photographs, papers, and artefacts celebrate the history of Spiritualism and both mental and physical mediumship.

When William attends several séances and is financially sponsored to investigate the truth behind the medium Kathleen Goligher, he slowly becomes obsessed with the spirit world and the potential communications across the veil. As much as the reader is drawn into William’s story, William is drawn into a downward spiral of mental health issues and paranoia, and I really felt for him by the end of the book, which ended up being a gripping tale based on meticulous historical research into the lives of William Jackson Crawford, Kathleen Goligher, and others, with some famous names popping up toward the end.

I truly enjoyed this book and hope to see much more from the author. Highly recommended.

I received an e-ARC from the publisher, Duckworth Books, through NetGalley in exchange for an honest review.