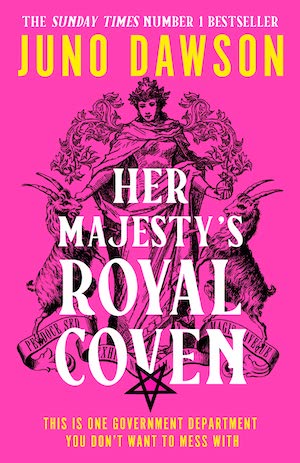 I came to Her Majesty’s Secret Coven somewhat nervous; the UK edition is a bright, neon pink and yellow hardback which is so far outside of my comfort zone. The book design is blinding and I hate it, but that’s just aesthetics. However, I have a thing for witches in fiction, so I wanted to give this a try.

In this book, Her Majesty’s Secret Coven is, quite literally, a governmental organisation which is tasked with protecting the United Kingdom from magical and occult threats. Still feeling the effects of a war eight years previous, the witches both inside and outside of the Coven are trying to rebuild their lives in various ways. Friends since childhood, Helena, Niamh, Leonie, and Elle, are all witches with different abilities. Helena, mourning her husband and now High Priestess of Her Majesty’s Royal Coven, is as stringent and strait-laced as they come, with very firm beliefs as to who is allowed within the Coven and who is not. Widowed Niamh, a sentient, is now a vet working in Yorkshire, having put her Coven days behind her. Leonie, another sentient, broke away from the Coven to form her own, called Diaspora, which provides a space for any BIPOC and LGBTQIA+ witches who do not feel accepted within the Coven. Elle, a healer, is now a wife and mother, and content with her quieter life. And then there’s Ciara, Niamh’s twin, hospitalised since the war…

The book begins with the capture of a war criminal, but then the story twists: the Sullied Child, a prophecy foreseen by the oracles, has been found, and this child will cause a demon to rise. Helena, blinkered by duty and honour, wants to protect the nation; Niamh, ever-compassionate, wants to help the child. And thus the fractures that have remained just at the edges of these childhood friends, start to tremble and crack in earnest, and sides must be taken.

I really wasn’t much of a fan of this book until about half-way in. Suddenly things kicked up apace, and I was then invested. Up to that point though, I thought it to be just okay. But the character dynamics and the emotion were gripping, and the spiralling of a certain character was as shocking as it was inevitable. I read the last of it whilst ill in bed and I was scared to blink towards the end. And that ending — I did not see that coming at all.  I’m anxious for certain characters now, and the sequel isn’t slated for release until June 2023.

As a Brit, the sheer Britishness of it rubs me the wrong way, especially certain dialect choices and the obvious references to the Spice Girls. I felt this was knock-the-reader-around-the-head-with-a-brick levels of subtlety, to be honest — yeah, we get it. There’s even a quote at the start of the book equating the Spice Girls to the Antichrist, and here we have a group of five friends who each bear enough of a physical resemblance to make it blindingly obvious if you’re in any way familiar with this Britpop band of the 1990s. Now, I’m 5-10 years older than the main characters so I guess I’m pretty familiar with all this and not all readers may be, after all. The pun around Her Majesty’s Royal Coven and our real-life Her Majesty’s Revenue and Customs is pretty slick, and I believe the sequel is called The Shadow Cabinet — something else that exists in the real-world UK (it’s the group of politicians in the opposition party — the party not in power — who hold political positions).

Some things irked me as a real life Witch, but hey. Can’t have everything, and I guess it’s best to separate fictional Witchcraft from real-life Witchcraft, but even so. I felt that having certain entities and deities automatically aligned good/evil was somewhat binary and disrespectful, and spilling salt to form a protective circle outside will kill the plant life, so not very Earth-loving! I enjoyed the Hollywood-isation of the magic but there were points were I rolled my eyes a bit.

This book has a lot to say about politics, gender, identity, inclusion, et cetera, and some of this is handled subtly and some of it not so much, but I did like that it tackled these subjects and didn’t turn a blind eye to them. There’s transphobia, racism, mental health issues, bereavement, and murder — but there’s also great LGBTQIA+ representation and strong female characters whose friendships and responsibilities are handled blisteringly well.

Overall, I really enjoyed this and am looking forward to reading The Shadow Cabinet next year. Recommended.

I bought and read this book of my own violation; neither the author nor the publishing company requested this review.