[Review] The Age of Witches by Louisa Morgan 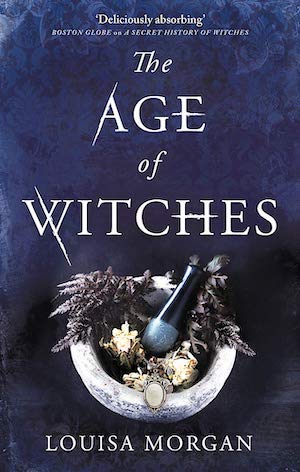 The Age of Witches was my first introduction to Louisa Morgan’s books, but since then I’ve read her debut, A Secret History of Witches, and next up is The Witch’s Kind — so you could say she left a certain impression. The books don’t interlink in any way that I’ve found (so far), so you can read them all individually, but I fell in love with the lust world building and magic, hence the binge. The Age of Witches is Morgan’s third book, and it drew me in immediately with the promise of witchcraft and herbalism.

This novel in set in 1890 and follows three protagonists — two cousins from a lineage of witches and the teenage girl caught between them. Harriet, the herbal witch who (mainly) follows a path of healing and do no harm, faces off against Frances, the witch who uses her power and magic to manipulate and twist the people around her to better her station. Annis is Harriet’s niece and Frances’ step-daughter; her world revolves around her horse, Black Satin (affectionately known as “Bits”) and trying to avoid an arranged marriage. Her dream is to become a famous horse breeder, even though it’s not the “sort of life” for a young woman of the time. However, she is unaware that she is witch herself and capable of wielding magic of her own.

This book had a quiet and gentle quality to it, with a world centred around horses, stables, herbalism, the natural world, and magic. It reminded me in places of Alice Hoffman’s Practical Magic and Diana Gabaldon’s Outlander series. It is a historical novel, and includes much of the societal norms and world of the 1890s, especially around women’s rights and the roles of daughters, mothers, and wives — but sprinkles in magic, herblore, and the power of the witch as both independent woman and supernatural power.

Annis soon finds herself being manipulated by Frances, who wants to marry off her step-daughter to both advance her own place in society and grant Annis a title of her own — and Annis has no choice but to play along if she is to see her horse again. Bits is presented as more than a horse — probably Annis’ animal familiar, to be honest — and he has a personality of his own. Their connection is strong, and Annis would do anything for him, even obey her step-mother’s wishes.

Harriet, on the other side, wants nothing more than the best for her niece, and to guide her in the Craft to become a witch of her own power and decisions. It is up to Annis to choose between the baneful or beneficent paths of magic — or to blend them to her own advantage. Annis finds solace and companionship in her aunt, and does not wish to bow to her step-mother’s wishes, but Bits is everything to her and so she sets out discovering her own magic and utilising it to evade Frances’ clutches. However, Frances will stop at nothing to manipulate the people around her — including her husband, various servants, and James, Annis’ societal marriage match. And then there is the matter of the proposed relationship between Annis and James, and their feelings — or not — for each other, and Frances’ and Harriet’s own psychological demons, wishes, and regrets…

I enjoyed this book very much. I liked how witchcraft was present throughout within the novel, whether it be within the herblore, the history, the magic, or the three women themselves. I appreciated the detailed world building, especially around the herbal aspects, and the characters were rich and well-developed. All of them got under my skin, and Frances was the perfect villain, driven by ambition and the need to escape her own past. I liked the inclusion of the asylum and how women who thought/acted/believed differently were treated in the late nineteenth century. I also really enjoyed the thread of family loyalty and responsibility that wove the three women together, and what each would do for themselves — and for each other.

As a Witch myself, I’m always wary of historical novels that include witches, because most often than not they heavily contain elements of witchcraft that are influenced by Wicca, which is a witchcraft-adjacent religion outlined in the 1940s and 1950s by Gerald Gardner. However, in The Age of Witches, I found that yes, whilst there are some elements that could be influenced by Wicca, the witchcraft here is actually more connected to working with the spirit of the land, plant and herbal magic, and folklorish cantrips (a magical spell, usually mischievous) and I really loved these elements —  because witches work with the land regardless of their location, and connecting with land spirits and green spirits is essential to any magic involving herbs and plants. Bringing this in was truly a stroke of genius and brought some gravitas to the Craft here. The Goddess is central to the witches’ belief system here, and while I know there’s no hard evidence to link historical witches to the worship of a matriarchal figure, however much we’d like there to be, in this book it works. It’s actually a beautifully rendered part of the story and gives a firm mythological foundation to the witches’ beliefs. The research behind this novel really is top notch.

Overall, I loved this book — after reading, I bought a paper copy, and started on A Secret History of Witches, which I’ve since equally loved. Louisa Morgan has a beautiful and lyrical writing style, and her novels are enchanting and magical. This is definitely a new favourite author for me and one to watch. Highly, highly recommended.

I received an e-ARC from the publisher, Orbit/Little Brown Book Group, through NetGalley in exchange for an honest review.