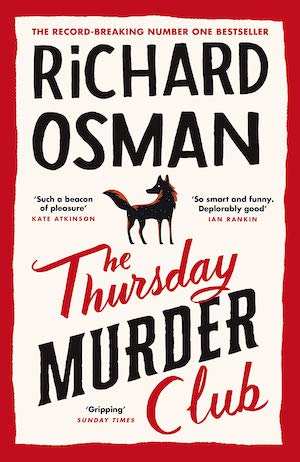 Let me begin this review by saying I don’t read crime. Ever. I think it’s a horribly conflated genre which gets a lot of hype but is boringly predictable and formulaic. However, I wanted to try The Thursday Murder Club because I find Richard Osman to be one of the most intelligent and erudite celebrities currently gracing our screens, and I was curious.

The Thursday Murder Club mainly takes place in and around Coopers Chase retirement village, formerly an old convent and graveyard, and now host to an array of characters — a wonderful blend of eccentric and poignant — enjoying the latter part of their years in companionable community. The titular club meets on a Thursday and was originally set up for the impressive Elizabeth and her friends to explore the cold cases to which fellow neighbour (and former police detective) Penny still has access. After Penny’s health declined, the Thursday Murder Club was down one member, and so in steps Joyce, former nurse and relative newcomer to Coopers Chase, enticed by Elizabeth. The rest of the club is rounded out by Ibrahim, a former psychiatrist, and Ron, the former leader of a trade union — and when a real murder takes place, the Thursday Murder Club just can’t resist…

Alongside the club members, we are introduced to other members of the community, such as Bernard and John, plus the owner of Coopers Chase (Ian) and his questionable business dealings and contacts. Then there’s the actual police, Donna and Chris, who are leading the investigation into the murder but who spend a lot of the time trying to both corral and catch up with the likes of the very persuasive Elizabeth and her friends. Add to this a mix of poignancy, potential romance, humour, and the fate of the graveyard itself, and you have the makings of a very clever, very intricate, and very entertaining story.

The characters are brilliantly British and are incredibly well-drawn. I was constantly kept within the story and whenever I wasn’t reading I was thinking about them and the murder. I didn’t see some of the twists and turns coming and I certainly didn’t work out the identity of the murderer. The structure of the story is deep and complex, and as well as the investigation the reader is kept occupied by the relationships between the characters and their various past careers and connections. The humour is top-notch and never once threw me out of the book — there’s a scene involving tea and cakes which had me in literal tears of laughter.

As well as the mystery and humour, there’s a lot of gentle poignancy, some of it bittersweet and some of it absolutely heartbreaking. I did weep over this book, several times — something I wasn’t expecting. As a reader I appreciated the gentle layers of emotion and the implied (and otherwise!) motivations of each character; as a writer myself I appreciated the care and attention taken to crafting each scene and the weaving together of the various plots to create a net in which to catch both the murderer and the reader themselves. The ending was brilliantly wrought and I was left seeking the next adventure.

I have since had to retract my comments about crime being a horribly conflated genre which gets a lot of hype but is boringly predictable and formulaic. The Thursday Murder Club was none of these things and was a most entertaining, captivating, clever, and emotional read. I have since ranted about this book to friends all over the world, my medical team, and my family — my poor husband has had to put up with me reading aloud sections, between tears of mirth and tears of heartbreak, at all hours of the day and night. Richard Osman has produced a brilliant debut, proving himself to be a fantastic author, and I can’t wait for the next one.

I received an e-ARC from the publisher, Viking Books UK/Penguin Random House, through NetGalley in exchange for an honest review.