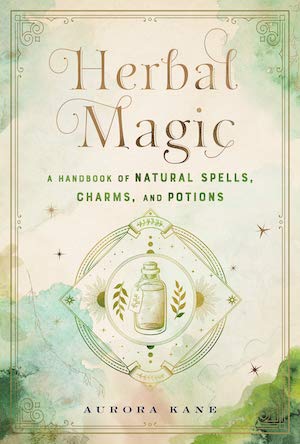 Herbal Magic by Aurora Kane is, I believe, one of a series based on different aspects of contemporary magical practice. I had not heard of this author or the series before receiving this book to review, but as an experienced Witch myself I was intrigued.

First off, the book is very pretty, with an aesthetic which mimics parchment pages and delicate, coloured pencil botanical art, which I can appreciate. It is separated into a series of introductory chapters which cover the basics of herbal magic, such as energies (aka energetic “genders”) and correspondences including colours, crystals, moon phases, and Goddesses from different religious and spiritual pantheons.

The second half of the book includes a brief directory of selected herbs, plants, and flowers, followed by a sampling of spells, rituals and recipes. It doesn’t include good information on how to plant, grow, or harvest any of these herbs — so if you’re wanting this, I’d recommend checking out the work of Jekka McVicar. It does give a little information on drying herbs for magical use, however.

There are some great nods to the historical use of floriography (using flowers to send secret messages), plant intelligence, and old, alternative names for some herbs (e.g. “eye of newt” being mustard seeds). I liked the brief introductions to spell jars, kitchen magic, poppets and worry dolls, brews and teas, and altars. I found the Goddess section to be quite hit and miss; some of the information given was good, whereas in other places it was incorrect — and why just Goddesses? There’s no mention of any Gods.

I found the layout in some of the initial chapters to really confuse me — for instance, in the moon phases section (pp.82-83), the moon phases are given in two columns per page — but these columns are not read left-to-right, but rather vertically, so you’re actually reading top-to-bottom for each column, and this really messed with my head. I found it confusing and counter-intuitive. This layout choice is also found within the zodiac signs section (pp.26-29), where, inconsistently, the first two and final two are all given in the left-to-right orientation, but the eight in the middle are given in the top-to-bottom format! All this goes to say that the layout choices for this book are not the best.

I like the colour correspondences, and that they go beyond the more “basic” or “traditional” intentions of love, beauty, prosperity, et cetera, and include intentions such as truth, comfort, kindness, and stability. The inclusion of “crystal enhancers” is also nice.

The Trees section is very sparse; only nine trees are given, and these are very traditional: Ash, Elder, Elm, Hawthorn, Hazel, Holly, Oak, Rowan, and Willow. While there’s encouragement to leave an offering to any tree (or plant!) from which you may harvest, there’s no mention that the traditional, or preferred, offering for the Elder is blood. Other trees do pop up in the herbal directory, however.

Additionally, I have some minor quibbles with some choices made within this book: the Elder tree is not called the “Elderberry”. She’s called “Elder”, that’s it. Equally, Cornflower is more commonly known as “Cornflower”, not “Batchelor’s Button”, and I know “Honesty” as “Honesty”, not “Moonwort” — however, I am reading as a Brit, and I note that the entry for Coriander leads with its American name of Cilantro, so some of these could just be regional differences. The inclusion of plants which could be considered to be weeds (e.g. Dandelion) is a great touch, as is the inclusion of plants which can easily be found in gardens as well as those which would be harder to find in the wild (but not necessarily in the “world foods” section of a large supermarket, for example).

In terms of the herbal directory itself, each herb is given a page to itself, with its Latin name and correspondences (planets, days, zodiac signs, element, and energy) shown at the top of the page alongside an illustration of the plant. There’s a brief paragraph summarising the herb, followed by magical properties, and finally a suggested magical usage and chant. It’s all very pretty but the information given is actually quick sparse — for instance, I would have preferred a much more obvious mentioning of any poisonous or toxic herbs — any warnings are actually in the summary paragraph and easily missed, which I find somewhat dangerous. Given there is space in the title “box”, couldn’t these warnings been included here?! It feels a bit “style over safety”, so, readers: please do be aware.

There are also multiple references to “smudging”, which is a closed practice belonging to some Indigenous peoples of the Americas; this cultural appropriation isn’t something I would expect of an author or publishing house in 2021, so it is a disappointment. Replacing this term with “smoke cleansing” would have been more appropriate.

Overall, this is a good primer, so long as readers read the herbal directory properly and spot the dangerous plant warnings, which are often hidden amongst other text. It would also work brilliantly alongside a book which goes deeper into this subject, a few of which I’ve listed below.

For those wanting more information about the magical properties of plants, then I’d recommend Susan Lavender and Anna Franklin’s Herb Craft; Paul Beyerl’s Master Book of Herbalism or his Compendium of Herbal Magic; or Scott Cunningham’s Encyclopedia of Magical Herbs.

If your interest is more towards herbal medicine, then Matthew Wood’s Book of Herbal Wisdom is a great place to start. For herbal kitchen witchery, then The Wild and Weedy Apothecary by Doreen Shababy is excellent. Also excellent is Harold Roth’s The Witching Herbs, which highlights thirteen more traditional (and baneful) herbs in witchcraft, and Amy Blackthorn’s Sacred Smoke, which is a contemporary guide to using herbs in spell craft and smoke clearing. Finally, for more on folk magic, folk herbalism, and plant lore, then the works of Corinne Boyer are a must.

I received an e-ARC from the publisher, Wellfleet Press, through NetGalley in exchange for an honest review. Furthermore, in the interests of transparency, I know the author via her blog and Facebook.