[Review] A Universe of Wishes edited by Dhonielle Clayton 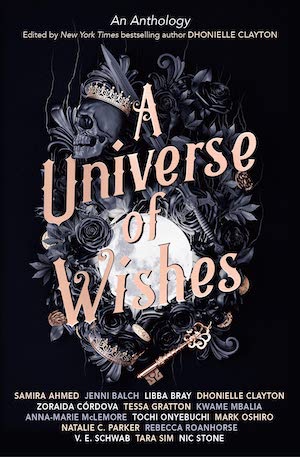 A Universe of Wishes is an anthology of fifteen young adult fantasy and science fiction short stories featuring a whole host of diverse characters from different backgrounds, cultures, identities, beliefs, and sexual orientations.

Usually, when I read an anthology like this, I find myself liking only a handful of the stories, but with this one there were actually only two I didn’t connect with. The rest were immensely readable and there are some which I wish were full novels.

The anthology starts off strong with the titular story, “A Universe of Wishes”A UNIVERSE OF WISHES by Tara Sim. This was a great story featuring necromancy, romance, dreams, and two queer boys from different backgrounds each looking for something more. I loved this and would happily read a more of this world and characters.

Next up was THE SILK BLADE by Natalie C. Parker. Again, another strong story about three warriors (one male, two female) competing for the hand of the prince, and what happens when the two female characters fall for each other instead. This I desperately wanted as a full novel and actually shrieked when the story ended where it did.

The third story, THE SCARLET WOMAN by Libba Bray, should not have been in here. It’s set in the same universe as the author’s Gemma Doyle books, and if you’ve not read them then this will go over your head. Suffice it to say, I have not read anything by Bray before and thus this story was confusing and I felt so lost in a very convoluted plot. I didn’t care about it or the characters at all. Maybe great for fans or those already familiar with this universe, but to the casual reader this was a missed opportunity.

Next was a different perspective on Cinderella, CRISTAL Y CENIZA by Anna-Marie McLemore. This was a challenging story to read, with LGBTQIA+ couples forced into “corrections” and only heterosexual couples “permitted”. The daughter of a lesbian couple goes to a ball to entreat the royal family to provide shelter for affected families, and gets more than she bargained for when she meets both the prince and the mother of one of his suitors. A great read overall.

LIBERIA by Kwame Mbalia is the first science fiction addition in this anthology, and it’s a story about ancestral memory, lineages, and honour — as well as plants, ecology, science, and loyalty — set on a spaceship heading towards a new colony on a distant planet. I really loved this one and wish it was a longer novel.

The next story, A ROYAL AFFAIR by V. E. Schwab, is set in the author’s A Darker Shade of Magic universe — but, unlike the story by Bray, this has an introductory paragraph so that newcomers do not get lost. The story is also written with enough world building dripped in, so that enough background information is given to anyone unfamiliar with the series. I’m a Schwab fangirl, and this story did not disappoint. It also gave me something to look forward to when I get around to reading A Conjuring of Light. I love this universe so much, and I’m pleased that Schwab is writing another trilogy based here.

Rebecca Roanhorse’s THE TAKEBACK TANGO was such a fun read and my introduction to Roanhorse’s writing style. I will definitely be searching out more by this author! This was a straight-up heist set in space and with great characters. I would love to see more of them.

I have mixed feelings about DREAM AND DARE by Nic Stone. It’s an interesting queer flip on the idea of who needs saving — the princess or the monster in the woods — and I did like how this played out. However, the writing style was quite jarring with lots of interior thoughts and telling not showing, so probably one of my least favourite in this collection, but I didn’t not like it.

I found WISH by Jenni Balch to be immensely fun! A great science fiction twist on the genie and the lamp sees the genie activated by a lonely girl in a space colony on Venus. The wish is particularly challenging but the genie is particularly drawn to befriending his mistress and we’re given a sweet story about friendship and connection.

The editor’s own addition to this anthology, THE WEIGHT, sees two lovers attending a futuristic facility where hearts can be temporarily removed and weighed to determine one’s biggest/truest love. While it follows a couple undergoing this process, we never actually find out what their respective hearts reveal, and thus was a bit of a let-down. Despite this, I did enjoy the story — I just wish the ending had been handled differently.

UNMOOR by Mark Oshiro broke my heart. It was the one story in the book where I had to stop and remember how to breathe once it was over. In this magical world, Unmoor representatives are powerful mages who can disconnect memories from physical spaces, allowing the heartbroken and bereaved some respite from painful memories and places. This story was so poignant and the ending had me in tears.

Samira Ahmed’s THE COLDEST SPOT IN THE UNIVERSE is another emotional read, following a young archaeologist from a different planet as  she and her team land on Earth to determine what happened to its people. Her connection with a girl, long lost, leads to two points of view narrating this story. Very depressing but well crafted.

I really enjoyed Tessa Gratton’s The Queens of Innis Lear, so I had high hopes for THE BEGINNING OF MONSTERS, set in a world where designers can craft you a new body when you’re tired of the old one. A young designer is assigned to a king but she has her own ideas. A sprinkling of romance, the threat of invasion, and an action-packed ending made this a great story but I would have liked to know more about the designers and how they hone their abilities.

The penultimate story, LONGER THAN THE THREADS OF TIME by Zoraida Córdova, is an interesting take on the story of Rapunzel, set in a New York where two realities — the mundane and the magical — bleed together and only some have one foot in each. The tower is found in Central Park, and the rescue doesn’t quite go as planned. There’s a lot more to this story than meets the eye and I would have loved this as a full novel.

HABIBI by Tochi Onyebuchi is the final story, and revolves around two prisoners — one in California and one in Gaza — who strike up a penpal romance via magic. This one missed the mark for me, sadly.

For me, the standouts were A UNIVERSE OF WISHES, THE SILK BLADE, LIBERIA, A ROYAL AFFAIR, LONGER THAN THE THREADS OF TIME, and my favourite, UNMOOR. I will probably re-read this anthology in time, but I wouldn’t include THE SCARLET WOMAN or HABIBI, as these two really didn’t do anything for me.

If you’re a fan of any of the authors contributing to this anthology, and pick it up solely because of that, then you will enjoy their contribution and probably find some new authors to explore. As a We Need Diverse Books collection, this is a great assortment of stories showcasing a number of diverse characters (and authors!) who offer empowerment and representation to those readers who may not otherwise see themselves in the vast majority of stories. Overall, a very good anthology.

I received an e-ARC from the publisher, Titan Books, through NetGalley in exchange for an honest review.

Thirteen years ago… Still so pleased we did this

I have another book idea! Yay — but also, ehh…

This was a good couple of days — when @instaveit

Had a lovely time on Monday, catching up with a de