[Review] A Master of Djinn by P. Djèlí Clark 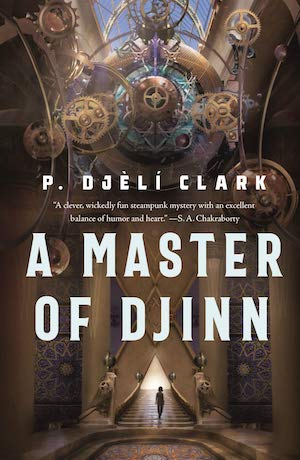 A Master of Djinn by P. Djèli Clark is set in an alternative, steampunk version of Cairo in 1912, where djinn and other magical creatures live alongside humanity. The Ministry of Alchemy, Enchantments and Supernatural Entities is tasked with investigating any crimes which have magical involvement — and that is where we begin: at a dinner party which ends in a magical, murderous massacre. To be honest, I really struggled with this opening, and almost put the book down. However, soon after this we meet the protagonist, Fatma el-Sha’arawi, who is something of a badass agent from the Ministry, and she is assigned with the murder investigation. Liaising with the local police is a different line to walk, however, and add in a new, overly-enthusiastic partner (Hadia) who is great with a knife, and those are just the start of Fatma’s troubles.

There are twists and turns aplenty, including the return of a supposedly-dead, mystical figure who had ripped a hole in reality and thus ushered in magical beings such as djinn and orcs some forty years prior. There are thieves, sword fights, magical battles, and politics — both within the Ministry and outside of it — all of which Fatma has to balance. And then there is Siti, Fatma’s girlfriend, who is hiding a secret of her own. To be honest, I loved Siti out of all the characters and I hope we see more of her in more stories set in this universe (I believe there are currently two novellas — A Dead Djinn in Cairo, and The Haunting of Tram Car 015 — which can be read out of sequence, and which I will be exploring as soon as I can). Siti is such a badass, though, and I really loved her spiritual connection to her Goddess. Ahmad, also, was an intriguing spiritual character and I would have loved to see more through his eyes. This was such a great and nuanced addition to the worldbuilding — the various religions within Cairo all existing alongside each other, whether it be the worship of the older Kemetic Gods (such as Sobek and Sekhmet), the Muslim way of life, or Christianity, with the various priests, priestesses, and holy people offering both help and hindrance to Fatma’s investigations.

I loved the world building. This alternative Cairo is fully realised, and I felt that I was there alongside Fatma, Siti, and Hadia as they worked to uncover the truth behind the mystery and the murders. The characterisation was also on-point, and I would love to dive back into this world and discover more about each of the main characters. The plot twisted and turned, and, although I did work out the identity of the perpetrator quite early on, it was such a fast-paced and easy, enjoyable read that I had to know what happened next. The “found family” trope is handled with care here, and honestly is so affirming and realistic that it warmed my heart. I loved the bookshop scenes in particular, and the magic was woven with such deftness throughout that it was so easy to believe in that this Cairo, this world, is real. I particularly loved the twists and consequences that came from wielding more significant magics, alongside the various different species of djinn and other creatures that come into contact with Fatma.

This novel had so much to say under the surface, though — there are themes of imperialism (particularly British), colonialism, white supremacy, racism, LGBTQIA+, gender, xenophobia, class, equality — but I didn’t feel that any of this was thrust in my face and rather just gave me bigger perspectives to consider outside of the book.

Even though I started this novel in a very disconnected way — I didn’t resonate with the opening scenes or characters — I ended up loving this book and feel that it’s one of the best fantasy novels of the year. Highly, highly recommended!

I received an e-ARC from the publisher, Orbit/Little, Brown Book Group UK, through NetGalley in exchange for an honest review.

I’ve needed to up the self-care of late, so last

I have lots of mugs, bookish and otherwise, but th

Signs of autumn coming through: berries on my rowa

Many years ago, a dear friend introduced me to wha

I recently got this book, “Folk Magic and Healin