[Review] The Man Who Died Twice by Richard Osman 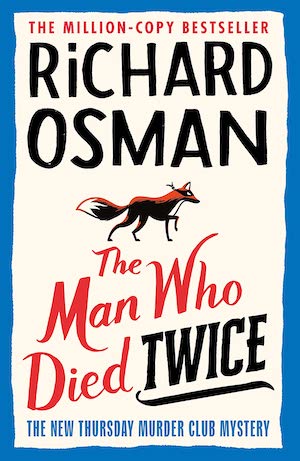 In The Man Who Died Twice, we return to Coopers Chase retirement village and the septuagenarian sleuths Elizabeth, Joyce, Ibrahim, and Ron. This time, Elizabeth’s past as an MI5 agent returns to haunt her in the guise of a former colleague, some stolen diamonds, and the Mafia. Soon enough there’s murder and mayhem as the friends try to get to the bottom of where the stolen diamonds are. There’s also an attack on one of their own, some blossoming romance between side characters, and a substantial amount of drugs.

As with the first novel, The Thursday Murder Club, the main characters are well-rounded and fully developed. The secondary characters could perhaps do with a little more polish here and there, but on the whole they are entertaining and relevant to the plot and shenanigans that go on throughout the story. We are treated to the main action with side forays into Joyce’s diary entries and flashbacks to Elizabeth’s former employment, with an underlying theme that actions have consequences, even decades into the future.

I enjoyed this book very much, though I would recommend that newcomers read The Thursday Murder Club first because it sets everything up so beautifully and gives lots of backstory. These characters really get under your skin and — despite it being a crime novel (which I almost never read) and about murder — it was a warm and welcoming return to Elizabeth, Joyce, Ibrahim, Ron, Bodgan, and the others. The very British humour is still on point without it being cringeworthy, which is something I hope continues throughout the rest of the series, and the plot had plenty of twists, turns, and complications to keep me guessing. The line “I suspect Elizabeth will happen” had me barking with laughter, but the introspections Elizabeth has around her marriage had me awash with tears. I really did resonate with her this time around, despite being decades younger, in a way that made my heart hurt, and that is the mark of good writing.

The only thing I would say is that some of the novelty of the first novel has worn off now, so it perhaps wasn’t as captivating as the first, but this is a minor point and I am excited to continue with the rest of the series as and when they are published. Very enjoyable and recommended!

I received an e-ARC from the publisher, Viking Books UK/Penguin Random House, through NetGalley in exchange for an honest review.