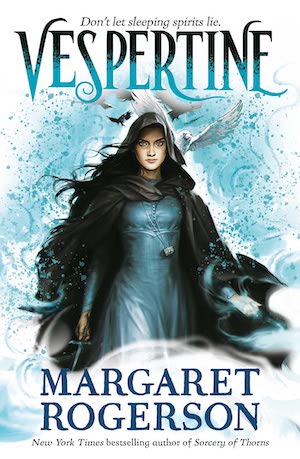 I read and thoroughly enjoyed Rogerson’s Sorcery of Thorns in 2019, and so it was with high hopes that I started Vespertine, her new novel (and, I believe, the first part of a series). I was not to be disappointed.

From the first pages I was fully immersed into this world where nuns train to serve the dead and dying — helping their souls to move on after death. However, they are also trained to deal with various spirits who did not get this kindness at the end of their life — maybe due to murder or battle, or illness in a remote village. These souls, depending on the manner of their death, become spirits with varying levels of ability to inflict harm on the living. The Grey Sisters, as the nuns are called, fight and release these spirits when necessary, with the more powerful nuns of their Order being able to wield relics left behind by the Saints — this may be a finger bone, or a mummified hand. Said relics contain the bound spirits of more powerful entities such as revenants, which, when released and used appropriately, can vanquish lower-level spirits intent on harming the living populace. This is a rare and potentially dangerous magic, and one that had me intrigued from the start.

Into this world we have Artemisia, who is training as a Grey Sister. Her hands are twisted and scarred from an incident in her childhood, and — along with her natural introversion — she is often the outsider. When her convent is attacked by possessed soldiers, Artemisia has no choice but to taken up a relic herself and allow a revenant to possess her in order to defend her fellow sisters. In doing so, she invites the revenant into her mind, and must learn both how to overcome her avoidance of others and how to strike up a partnership with the revenant to the best of their own abilities and goals.

Artemisia ends up heading into the world outside her convent in order to find out who is behind the uptick in spirit activity all over the country, ranging from the harmless shades and wisps of the First Order of Spirits to the dreaded riveners of the Fourth Order or even the revenants of the Fifth Order. Her travels take her into the middle of battles and refugee camps, where her uneasy alliance with the revenant becomes in handy. And as she gets closer to the truth, more is revealed about her revenant, the history of Grey Sisters, and the impact and possibilities of magic. Add in politics, ace representation, reluctant heroes, betrayals, found family, and lots of twists, and you’re in for the ride of your life with this quick-paced, breathless story.

I loved this book. Artemisia is such a great heroine — she’s reluctant, a bit naïve, woefully untrained, sarcastic, and morally grey. Some of the things she does are awful, but they’re for the right reasons… Aren’t they?! The revenant is sulky and sassy all on his own, and downright scheming and manipulative, but also so very damaged from what has been done to him over the years. Marguerite is the strong, observant friend you never knew you needed, Jean the soldier with PTSD and a heart of gold, Charles the brave and valiant, and so many more. I thought the secondary characters were great foils to Artemesia and the revenant, whose name and history we eventually learn. And we must not forget the clever Trouble, whose appearances were pivotal.

This is a dark fantasy and does not shy away from that fact. It is eerie, creepy, and spooky. The atmosphere and heart-thudding fear are — at times — very real. As well as ghosts and spirits, we have a disabled protagonist with mental health issues, more mental health awareness and representation amongst the secondary characters, and questions about what constitutes good and evil, why we fight wars, and the fallout from such. There is obviously some influence from Catholicism here, too, ranging from the ideas of reliquaries, the entombing of important figures within altars, the censers and incenses, and so on. As a Witch, I adored the magic and supernatural aspects of this world and I am so, so very grateful that there will be (at least) a sequel.

After finishing the e-arc, I promptly bought the hardback edition and the FairyLoot exclusive edition as well! I loved this novel and it’s easily up there as one of the best reads of the year. In fact, I thought I’d already found my favourite read of 2021, and now I’m second-guessing that fact. Vespertine cements Rogerson as one of my favourite authors now. Highly, highly recommended.

I received an e-ARC from the publisher, Simon and Schuster, through NetGalley in exchange for an honest review.

I’ve needed to up the self-care of late, so last

I have lots of mugs, bookish and otherwise, but th