[Review] The Great Witch of Brittany by Louisa Morgan 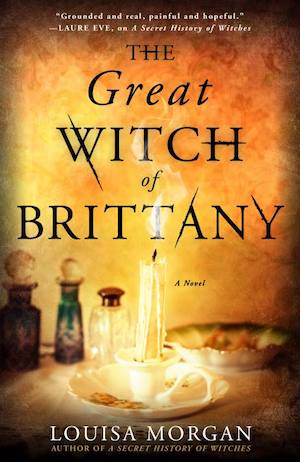 I first encountered Louisa Morgan’s books in 2020, when I had the opportunity to advance read/review The Age of Witches. That was a five-star read for me, and I immediately bought and devoured her debut, A Secret History of Witches, and also The Witch’s Kind. In those books, I’ve had the pleasure and pain of knowing some amazing characters, of visiting some evocative places, and experiencing a myriad of emotions — but one character really got under my skin, and that was Ursule, the matriarch of the Orchière family, who gave her life to protect her family at the beginning of A Secret History of Witches. Though she only appears in the introductory pages of that novel, Ursule’s presence as grand-mère, as Witch, as protectress, as ancestor, hovers at the edges throughout, and she really fascinated me.

Now, with The Great Witch of Brittany, we finally get Ursule’s story, told from her perspective. From her childhood as part of a Romani caravan family, to her fall and life as a farmer’s hand, to her rising again to become the matriarch of the Caravan of Widows, Morgan weaves Ursule’s story with the deftness of a master storyteller. Family, magic, emotion, danger, and faith are all woven together to create a beautiful, if poignant, story about a girl whose magic awakens and revives the family line of witches, once thought lost.

Initially, we meet Ursule as the daughter of Agnes, who is the fortune-teller for her Romani family, as they travel from town to town in Eighteenth Century France. It’s all an act, of course, carefully wrought — until Ursule blossoms into womanhood, and her magic awakens, giving her the gifts of knowing and witchcraft. Danger soon laps at their heels, and Agnes protects her young daughter by allowing herself to be captured as a “witch”, with her burning set to happen a few days hence. There’s also an overlapping storyline about Ursule’s suitors, one of whom is violent and there is an attempted rape scene, so readers beware. However, Ursule is rescued and, in turn, rescues her mother, and both go on the run in a time when being a woman, especially a woman who lived alone, could result in a hanging or burning, and news of these events are peppered throughout the novel, a very real threat that never goes away. However, they flee without their two most prized possessions: the Orchière grimoire, and the magical crystal which blazes to life when touched or used by certain women in the family.

In time, Ursule and Agnes take refuge as farmer’s hands in the employ of Remy and Madeleine Kerjean, a childless couple carving out a living on their dairy near Keranna. Over the chapters that follow, we see Ursule and Agnes settle into their roles on the farm, and Ursule finds an animal familiar in the shape of a very opinionated raven, whom she names Drom. Their relationship becomes very much akin to a bubble around them, which is a clever way of furthering the isolation Ursule has felt all her life: an outsider in a group of outsiders, always. Even when she has a daughter of her own, Ursule finds herself on the edges, only to be called upon in times of great need. And so it is in her magic that Ursule roots herself, the magic of herbs and simples, of charms and philtres, of the ancestors who walked before her; it is this, along a deep devotion to the Goddess (and, later, Saint Anne), which becomes Ursule’s compass.

As with Morgan’s other Witch books, I found this very easy to read, and incredibly immersive. The historical settings were well-realised, and the characters very well drawn and memorable. The world-building, picking up on where A Secret History of Witches left off, was brilliant, and I really could imagine myself as part of the caravan or on the farm, or travelling. There’s an overarching atmosphere of fear, of waiting for the other shoe to drop, and I could understand why Ursule made the decisions she made, worked the magic she worked — even if the consequences were not as expected. I confess some sections had me openly weeping. The inclusion of the stories of some of Ursule’s ancestors, whom she invokes in ritual, was much appreciated and definitely added to the story.

Anyone who follows my reviews knows that I have a vested interested in novels which include witches, because I’m a Witch myself. I’ve said before, when talking about Louisa Morgan’s novels, that there are some aspects which are influenced by Wicca, the witchcraft-adjacent religion outlined in the 1940s and 1950s by Gerald Gardner, and this is also the case in The Great Witch of Brittany, but it works. The use of herbs, philtres, charms, and so on, all have their place in history and the research here is so well done. Evoking the old Celtic festivals, such as Imbolc (which can be traced back to at least the 4th Century) is a beautiful touch, even if the Wheel of the Year as used here is the more modern-day interpretation, including some sabbat (festival) names which have come into usage more recently — but it works; it doesn’t knock the reader out of the story, and instead invites them closer, as if part of the ritual circle themselves. Additionally, including the Goddess and the ancestors as central to the witches’ belief system is exquisitely rendered; whilst there is no hard evidence connecting our witch ancestors to the worship of the Divine Feminine, in this novel it’s a powerful foundation for the acknowledgment of women’s place and power in a world not ready to accept them.

Morgan doesn’t pull any punches in this novel; there’s a lot to be said about the role of women in general, and the stereotypes of Romani culture. There are a few slurs throughout the novel, but these are either used by Romani themselves or those outside the culture, with the intent to harm. I don’t believe these are used to shock the reader or cause harm to any readers of Romani descent, but rather to highlight the misunderstanding and racism that — to this day — hound the Romani and other Travelling communities and cultures. This racism isn’t overdone or forced down the reader’s throat, rather just presented as a lived experience Ursule and her family go through, even if — like Léonie — the realisation comes too little, too late. There’s also a lot to be said about the importance of women’s intuition and rituals, how differently leadership and community can look, if only we open our eyes to the possibilities.

I’ve loved each of Morgan’s Witch books so far, but this is my favourite. Ursule is a powerful and confident character who is inspirational in how she deals with challenges. Her sharp observations of the world are astute and clever; her decisions may sometimes be questionable, but her reasons are always borne from a place of love and the deep need to protect and heal those she loves, as well as her devotion to the Goddess, her ancestors, and Saint Anne (the inclusion of the relic was superb). Yes, she is strong, but she’s also so fantastically human that she was easy to resonate with.

Since the start of A Secret History of Witches, I’ve always felt there was more to Ursule’s story, and I’m so grateful that Morgan decided to write hers. For me, Ursule goes down in witchy literature as one of the greats, like Aunt Frances in Alice Hoffman’s Practical Magic quartet — and she certainly deserves, and lives up to, her title of The Great Witch of Brittany. Highly, highly recommended, and my favourite read of 2022 so far.

I received an e-ARC from the publisher, Orbit/Little Brown Book Group, through NetGalley in exchange for an honest review.